This residential project in the southwestern Pasadena neighborhood near Johnston Lake was designed in 1984 for a hilly area of mostly early modern architecture, developed in the 1940's around the old Annandale golf course. (FB discussion here) The design is a metal roofed, steel-framed structure atop CMU on a steep, wooded lot. The south facing glass tower is downslope in the ravine, which faces north. This tower is used to create a chimney effect for natural heating and cooling by use of ventilation fan at the top of the tower. This draws warm air from the rest of the house which is replaced by the cooler air at the base of the structure on the north facing side. Foundation retaining walls & slab keep the lower rooms cool in the summer, open on the north side, using thermal mass inertia.

Example of deriving a hillside design from zoning, code, design and site criteria that conforms to steep site slopes: 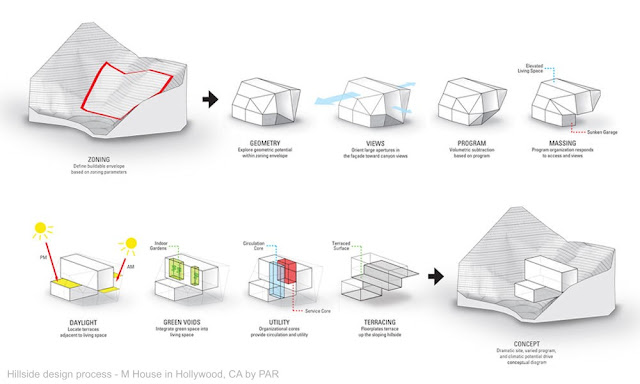 A similar design problem, but more extreme, can be found here. A more recent one in Highland Park, is an example of a small project on a very steep lot, built on spec.


Where Am I? The Power of Uniqueness  a TEDx talk by Ed McMahon

Nature in Design - The Biophilia Effect  the preference for nature has a name: biophilia, which literally means “love of life.”

In 1995 Stewart Brand, founder of The Whole Earth Catalog (described by Steve Jobs as “Google in paperback form, 35 years before Google came along”) wrote a book about how buildings adapt to the changing world around them, called How Buildings Learn. Brand also made a 6-part documentary with the same name as his book, which was produced in 1997 by the BBC.